Cute Moment Of The First Time Dad Shared In Tiktok Has Amassed More Than 24.9 Million Views

Becoming a father for the first time. Congratulations! While this can be one of the happiest times in your life, it can also be a very emotional and confusing experience. 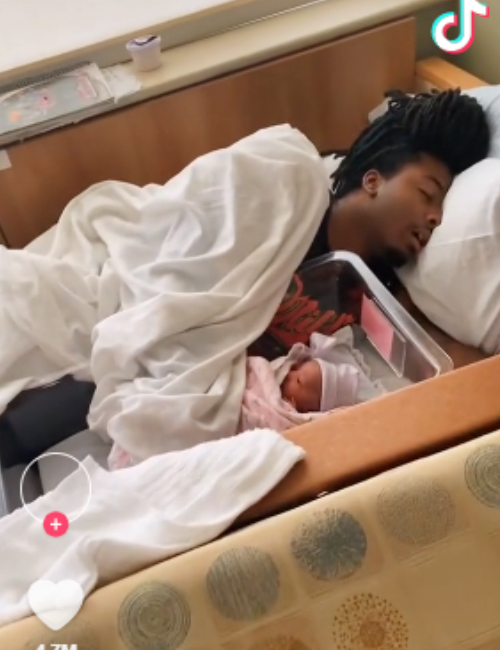 This new dad went viral on TikTok after his wife captured him snuggled next to their newborn daughter in an adorable effort to protect her, soon after she was born. While recovering in the hospital after giving birth to her daughter, TikTok mom Robbie Dorris woke up from a nap, and realized that her daughter wasn’t in the bassinet next to her bed.

She then walked over to the couch and couldn’t believe what her husband had done. The new dad was sound asleep with the newborn laying next to him in the tray that initially was in the bassinet. Dorris couldn’t help but laugh at how protective her husband was of their daughter. But she did suggest that it may not have been the best thing to do at the time. 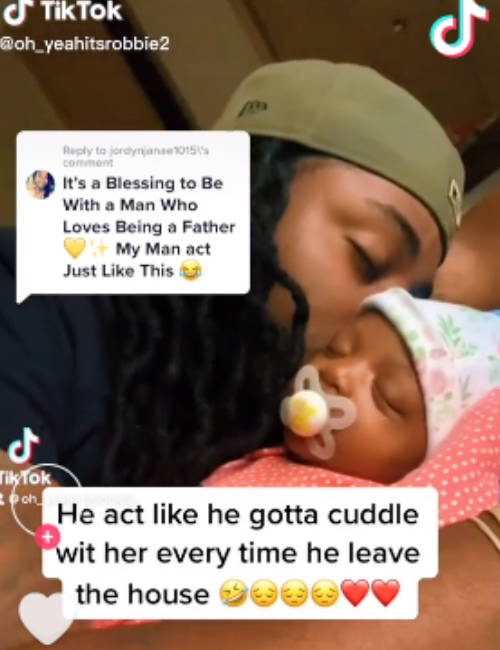 “Somebody tell him he can not do this,” she wrote in the caption.
The two were getting some much-needed sleep with the dad wrapped inside the covers and his baby girl snuggled next to him. As a first-time dad, he did not want to miss anything to do with his daughter’s well-being. This is definitely an unforgettable moment that will be shared with the little one when she gets older.
TikTok users shared their thoughts on the dad’s actions. The video has amassed more than 24.9 million views, and TikTok users have shared their thoughts on the dad’s actions in the comment section.

“You gotta get pics,He’s a new dad and dad’s love they daughters.”” one user wrote
“Ever since I had my daughter it’s been over for me and my man,” commented another. 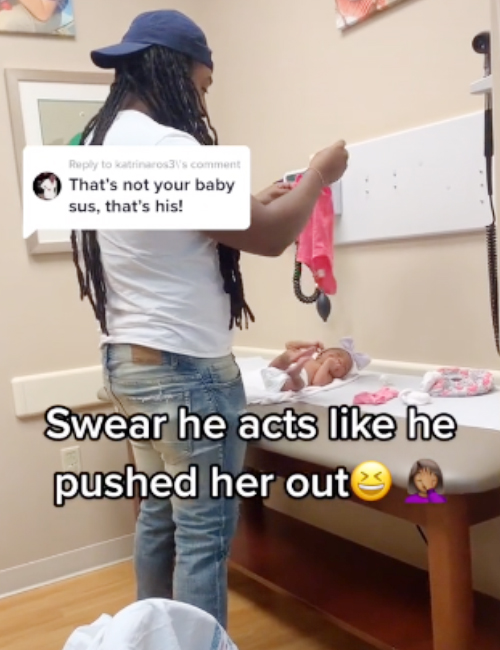 One user pointed out that the new dad is going to be the first to care for her after establishing a close bond with his daughter. “I see him doing late night feeding and diaper changing with a smile on his face and love in his heart,” the person wrote.

Although hospital staffers told them they couldn’t do this, Dorris said she wanted to capture the sweet moment. “They actually told us we still couldn’t do this but I still caught this beautiful moment ,” she wrote.

Another person responded, “I don’t think anybody’s gonna be able to tell him he can’t take his daughter wherever he wants. so sweet.”

The father-daughter duo has been inseparable since bringing her home. This new dad evidently hasn’t left his baby girl’s side since taking her home from the hospital. Dorris captured another adorable moment of her husband cuddled next to their daughter before leaving the house.
“He act like he has to cuddle with her every time he leaves the house,” she wrote.
It’s obvious that these two will enjoy a lifetime of memories shared together! Dorris has posted several videos since baby Journey was born and she seems to be enjoying every moment of motherhood as well. 6 Things Your Newborn Actually Needs All Mom Should Read When Do Babies Lᴀᴜɢʜ For The First Time